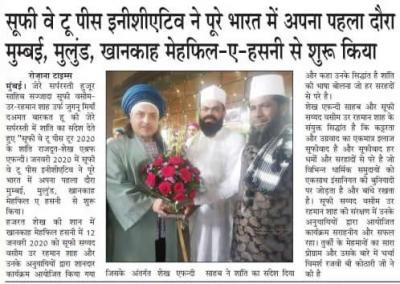 On January 12, 2020, at Khankah Mehfil Hasani in the honor of Hazrat Sheikh, a spectacular program was organized by Sufi Sayyed Wasim Ur Rehman Shah and his followers, under which Sheikh Effandi Sahab gave the message of peace and said his principle is to speak the language of peace which every frontiers Is beyond.

The joint tenets of Sheikh Effandi Sahab and Sufi Sayyid Wasim Ur Rehman Shah that Sufism is the only cure for bigotry and extremism and Sufism is beyond every religion and frontiers that unites and binds the various religious communities together on the basic of humanity.

The program organized by his followers under the patronage of Sufi Sayyid Wasim ur Rehman Shah was commendable and successful.