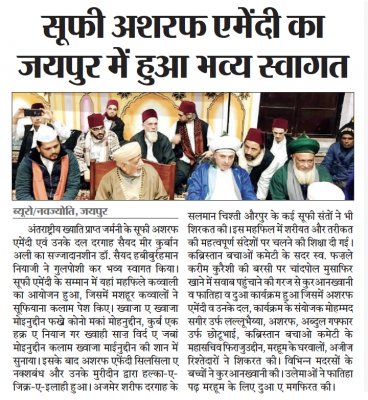 The Dainiknavajyoti newspaper in India reported on 14. January 2020 on an event organised by our friend, the renowned Sayyid Salman Chishty.

As part of the ceremony a Qawwali music group performed Sufiyana Qalaam after which the Sufi group from Germany lead the congregation in Zikir and Hadra.

Earlier that evening in response to an invitation from Mohammed Sageer, the Sheikh and his group participated alongside children reciting Quran for a congregation of several thousand, in the annual memorial ceremony for the late Fazle Kareem Qureishi in Musafir Khana Chandpole.